Resonance occurs when the natural frequency matches the forcing frequency — equal exponents from inside and outside.

Well, you see spring has finally come to Boston. My sweater is gone and it's April the 16th, I think. It's getting late spring. So today, this video is the nice case, constant coefficient, linear equations, and the right hand side is an exponential. Those are the best.

And what do we do when the right hand side is e to the st? We look for a solution, a multiple of e to the st. Capital Y times e to the st, that's going to work. We just plug into the equation to find that transfer function capital Y. Can I just do that?

I'll do it for the nth degree. Why not? So will I plug this in for y, every derivative brings an s. Capital Y is still there, the exponential is going to be still there, and then there are all the s's that come down from the derivatives, and s's from the nth derivative. One s from the first derivative, no s from the constant term.

Do you see that equation is exactly like what we had before with as squared plus Bs plus C. We have quadratic equation, the most important case. Now, I'm including that with any degree equation, nth degree equation. And what's the solution for Y?

Very nice formula. Couldn't be better. And you remember for second degree equations, our most important case is as squared Bs plus C. That's the solution almost every time. But one thing can go wrong.

Now, if the forcing s is one of those no solution s's, we have a problem. Because this is 1 over 0 and we haven't got an answer yet. 1 over 0 has no meaning. So I have to, this is called resonance. Resonance is when the forcing exponent is one of the no exponents that make this 0.

And there are two of those for second order equations and there will be n different s's-- s1, s2, up to sn-- for nth degree equations. Those special s's, I could also call them poles of the transfer function. The transfer function has this in the denominator and when this is 0, that identifies a pole. So the s1, s2, to sn are the poles and we hope that this s is not one of those, but it could be.

And if it is, we need a new formula. So that's the only remaining case. This is a completely nice picture. We just need this last case with some resonance when s equals say s1. I'll just pick s1 and when A, I know that As 1 squared plus Bs 1 plus C is 0. So Y would be 1 over 0. And we can't live with that.

If I plug-in e to the s1t, the left side will give 0. So I can't get for equal to a forcing term on the right side. I need a new solution. I need a new y of t.

Can I tell you what it is? It's a typical case of L'Hopital's rule from calculus when we approach this bad situation, and we are getting a 1 over 0. Well, you'll see a 0 over 0 and that's L'Hopital's aim for. So where do we start?

It's very particular because a t equals 0, it's 0. Do you see that, you see what's happening here. The question, resonance happens when s approaches s1. Resonance is s equal to, resonance itself is at the thing.

Do you remember L'Hopital? It was a crazy rule in calculus, but here it's actually needed. So as s goes to s1 this goes to 0 over 0, so I have to take derivative over derivative. So let me write the answer. Y resonant.

And now, I have derivative over derivative, I can let s go to s1. So s goes to s1, this goes to s1, and I get an answer. The right answer. This is the correct solution and you notice everybody spots this t factor. That t factor is a signal to everyone that we're in a special case when two things happen to be equal.

If s1 was a double root, if s1 was a double root, then, well, that's just absurd, but it could happen. Then not only is that denominator 0, but after one use of L'Hopital, so we have to drag L'Hopital back from the hospital and say do it again. So we would have a second derivative. I won't write down that solution because it's pretty rare.

So what has this video done? Simply put on record the simplest case possible with a forcing function, e to the st. And above all, we've identified this transfer function. And let me just anticipate that if we need another way to solve these equations, instead of in the t domain, we could go to the Laplace transform in the s domain. We could solve it in the s domain.

And this is exactly what we'll meet when we take the Laplace transform. That will be the Laplace transform, which we have to deal with. So that transfer function is a fundamental, this polynomial tells us, its roots tell us the frequencies, s1, s2, and the no solutions. And then 1 over that tells us the right multiplier in the force solution. 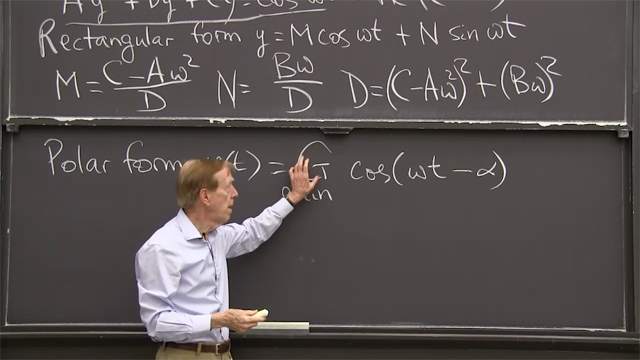