You are now following this topic

You are now following this channel

New in R2020b: Record snapshots of your app 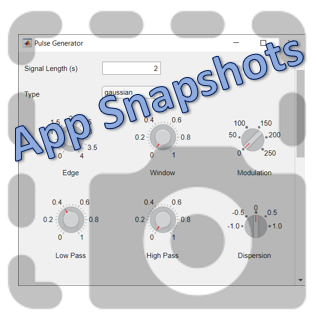 As of MATLABs R2020b release , we no longer must rely on 3rd party software to record an image of an app or uifigure.

exportapp(fig,filename) saves an image (JPEG | PNG | TIFF | PDF) of a uifigure ( fig) with the specified file name or full file path ( filename). MATLAB's documentation includes an example of how to add an [Export] button to an app that allows the user to select a path, filename, and extension for their exported image.

Here's another example that merely saves the image as a PDF to the app's main folder.

2. Define the callback function to name the image after the app's name and include a datetime stamp. The image will be saved to the app's main folder.

getframe(h) captures images of axes or a uifigure as a structure containing the image data which defines a movie frame. This function has been around for a while but as of r2020b , it now supports uifigures. By capturing consecutive frames, you can create a movie that can be played back within a Matlab figure (using movie ) or as an AVI file (using VideoWriter ). This is useful when demonstrating the effects of changes to app components.

The general steps to recording a process within an app as a movie are,

1. Add a button or some other event to your app that can invoke the frame recording process.

2. Animation is typically controlled by a loop with n iterations. Preallocate the structure array that will store the outputs to getframe. The example below stores the outputs within the app so that they are available by other functions within the app. That will require you to define the variable as a property in the app.

3. Call getframe from within the loop that controls the animation. If you're using VideoWriter to create an AVI file, you'll also do that here (not shown, but see an example in the documentation ).

4. Now the frame data are stored in app.recordedFrames and can be accessed from anywhere within the app. To play them back as a movie,

To demonstrate this, I adapted a copy of Matlab's built-in PulseGenerator.mlapp by adding

Recording process (The GIF is a lot faster than realtime and only shows part of the recording) (Open the image in a new window or see the attached Live Script for a clearer image).

Playback process (Open the image in a new window or see the attached Live Script for a clearer image.)

Review: How to get the handle to an app figure

1. Store the app's handle when opening the app.

2. Search for the figure handle using the app's name, tag, or any other unique property value

3. Change the HandleVisibility property to on or callback so that the figure handle is accessible by gcf anywhere or from within callback functions. This can be changed programmatically or from within the app designer component browser. Note, this is not recommended since any function that uses gcf such as axes(), clf(), etc can now access your app!.

See a complete list of changes to the PulseGenerator app in the attached Live Script file to recreate the app.

This cannot be undone.

Thanks for this useful article!