Simulation of a missile valve with Simscape

Tom Engels 2021년 2월 10일
⋮
댓글: Pat Gipper 2021년 2월 11일
채택된 답변: Pat Gipper
Hello,
I would like to realize a missile valve in Simscape. For the valve I use the Local Restriction. Now I would like to close the valve when a previously defined mass or volume flow is reached and keep it closed until the end of the simulation.
A first approach was to implement an if-condition in Simulink. I was able to use this to close the valve when a defined mass flow was reached but not able to keep it closed, as it reopens as the mass flow drops.
Does anyone have an idea how I can keep the valve closed state? Is there a corresponding block in Simulink or Simscape?
Thanks a lot and greetings
Tom

Pat Gipper 2021년 2월 11일
⋮
Hi Tom,
A flip-flop will latch the valve shut once the flow reaches the threshold and keep it shut until you manually reset it. That is an S-R Flip-Flop in the picture. 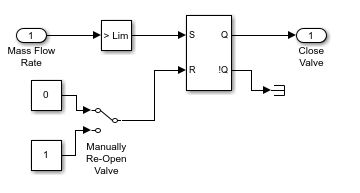 ⋮
Hi Pat,
thank you very much, this is exactly what I was looking for!
Many greetings
Tobias

⋮
Your welcome Tobias. I was worried that what you really wanted was less electronic and more of something that could be directly implemented in the hydraulic world (e.g. hydraulic fuse). But if all you needed was the function then the flip-flop works.