Wireless Coverage from One Autonomous Aerostat Equivalent to 15+ Cell Towers

A plump, white aerostat floats 500 feet above a small town in southern New Hampshire. Although blimps are a common sight above sports stadiums, this one seems out of place hovering over a bucolic patch of New England. It belongs to Massachusetts-based Altaeros, which has plans to turn tethered air vehicles like this one into autonomous telecommunication SuperTowers that deliver phone and high-speed wireless internet to homes, businesses, and farms in rural communities. One SuperTower could service the same area it would take 15 to 20 conventional cell phone towers to cover.

And because the aerostats operate autonomously and require significantly less infrastructure to get up and running, the cost to deploy them is about 60% less than that of setting up cell phone towers, says Ben Glass, CEO of Altaeros. It’s the kind of savings that could help rural areas go from spotty, unreliable, and slow service to superfast, state-of-the-art 4G and 5G networks. 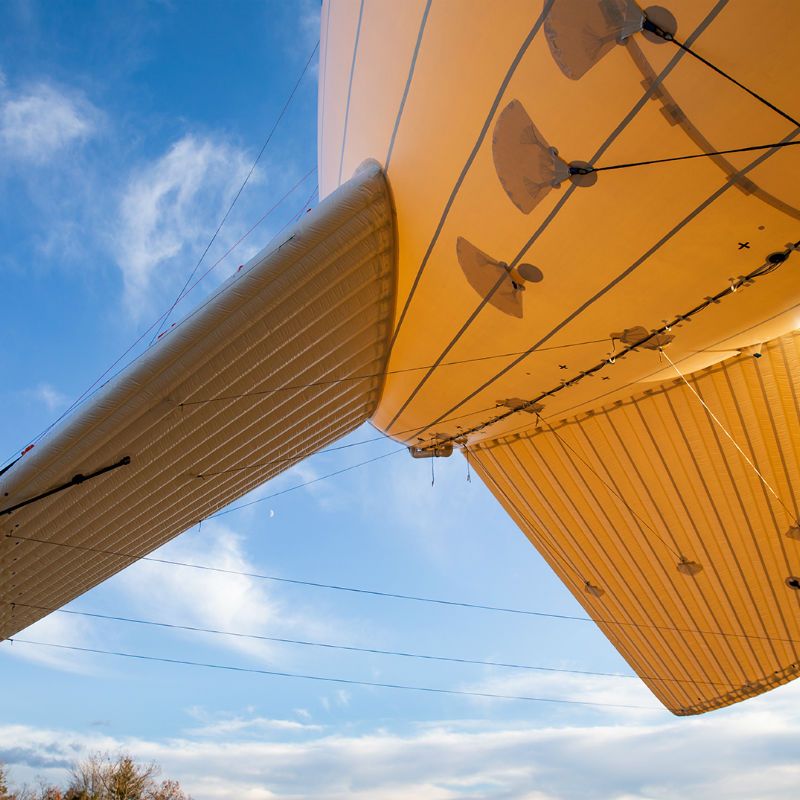 That could be a game-changer not only for sparsely populated regions of the United States, where more than 14.5 million people lack access to high-speed broadband, but also for rural areas in Europe as well as in developing regions, such as Africa. 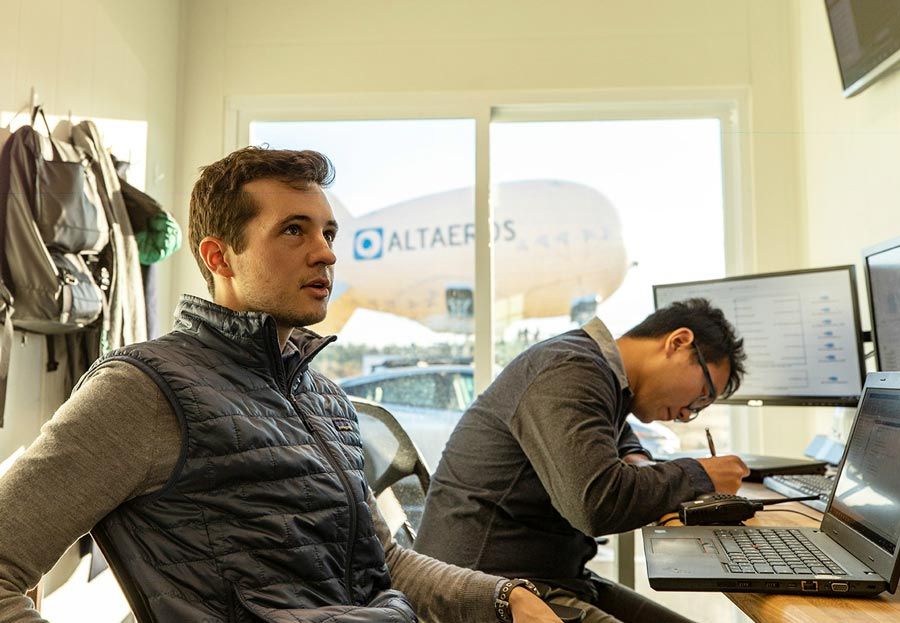 Rural broadband has lagged behind urban internet for one simple reason: cost. A 2018 study estimated that installing high-speed, fiberoptic cables at anchor institutions—including schools, hospitals, and libraries—in rural communities around the United States could cost $13 billion to $19 billion. Building cell phone towers for wireless broadband isn’t any cheaper. An analysis from 2017 estimated it would take 37,500 180-foot-tall macro towers and cost nearly $12.5 billion to upgrade rural areas in the U.S. to 4G.

It’s expensive to operate a conventional aerostat, too, says Glass. These air vehicles, which have been around since the late 1700s, are typically managed by a sizable ground crew. If Altaeros’ SuperTower operated manually, it would require about 10 people to work the tethers and winches that deploy the aerostat to the correct altitude, point it in the right direction, and bring it back down for maintenance. The crew alone would eat up about 70% of the operating budget, says Glass. He and his team knew that for their SuperTower to make economic sense, they would have to eliminate the need for a large ground crew.

The computer model represents the physical SuperTower and provides a detailed analysis of how the vehicle operates in different environments under different scenarios. For instance, engineers use the program to test how the airship might behave in winds exceeding 50 miles per hour. They analyze how the system might respond should a motor on a winch fail. Sensors on the airship are designed to collect environmental and systems data over time to refine and validate the computer model and make it more accurate.

The computer model is converted into code that autonomously operates the ship’s hardware. The aerostat launches from a rotating platform, moored with three tethers. The cables anchor the blimp, and one also delivers power and data. Different scenarios cause the aerostat to take certain actions. For instance, if sensors find that the winds are gusting strongly at a high altitude, the system lowers the aerostat to a height where the winds are calmer.

“It’s continuously adjusting its orientation and position to keep the platform as steady as possible,” says Glass.

If the airship begins running low on helium, a sensor sends an alert to a network operations center and requests maintenance. Glass says he envisions one person overseeing dozens of SuperTowers.

From 2016 to 2017, Altaeros ran three pilot tests of their autonomous system. They used a 43-foot aerostat and two 50-foot prototypes, all equipped with radio receivers and antennas from Ericsson. After launching them about 500 feet into the air, the blimps began broadcasting 4G LTE signals.

During the tests, Glass and his team were looking at telecom performance. In particular, they analyzed how the signals propagated and how the systems handled transferring connected cellular calls or data sessions from one cell site to another without disconnecting them. Overall, they found that the LTE system performed well and there was no degradation of signal or dropped calls as a result of the SuperTower’s motion.

“Unsurprisingly, the radio frequency propagation was excellent because we were emitting from very high,” says Glass. Glass says the company is currently evaluating a 100-foot commercial version.

Service providers are very interested in the rural broadband solution Altaeros is engineering, says G.S. Sickand, the chief technology officer of Ericsson America. “They see the value. If you go in and say you could replace 20 normal macro towers with one of these aerostat-based towers, it’s extremely intriguing.” If there’s any hesitancy, he says, it’s because the platform is new and completely different from anything the industry has seen before. Sickand thinks that once service providers see two or three aerostats in operation, their initial reticence will disappear. 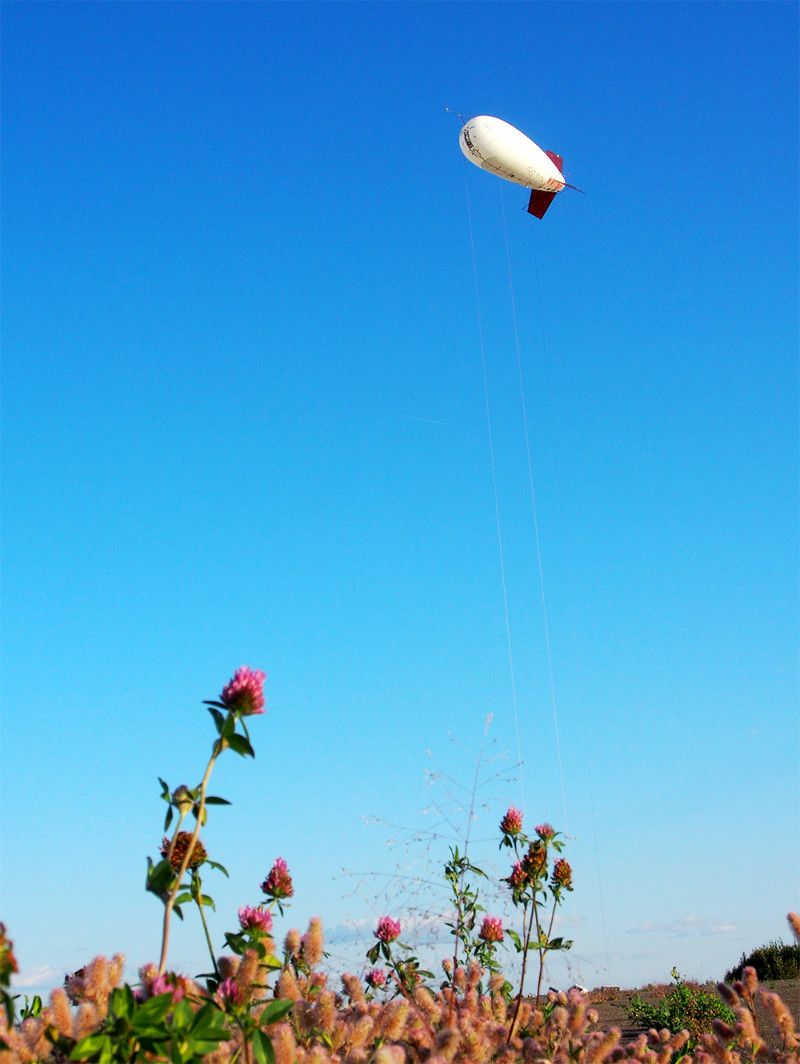 Although Altaeros is on the cusp of commercial deployment, getting there will not be without its challenges. Altaeros is flying into unknown skyways, and they’ll need to overcome some operational and regulatory obstacles, says Sickand. On the operational side, the airship will need to come down for maintenance from time to time, which means it won’t be providing service. These events can be scheduled for times when most customers are sleeping, says Sickand.

“Unsurprisingly, the radio frequency propagation was excellent because we were emitting from very high.”

The aerostat must also come down in the presence of severe weather that accompanies tornadoes and hurricanes. This would render service unavailable for the short period it’s down, which could remove service during times it’s needed most. Glass says that Altaeros has considered strategies to fill the gaps. Other overlapping 3G or 4G networks could be tapped, an adjacent SuperTower could broadcast into the area, or drones could be brought online to provide temporary service. Glass notes that the same high winds that might ground a SuperTower could also damage cell towers and their equipment. Secured on the ground, the undamaged SuperTower could come back online more quickly than it would take to repair a damaged cell phone tower.

“The situation isn’t ideal, but you have to weigh the occasional lack of coverage at a couple of times a year against no coverage at all,” says Sickand. “In my view, the pros far outweigh the cons.”

The regulatory obstacles may present the biggest challenges, says Sickand. Because the aerostat extends into the sky much higher than any other tower, Altaeros will need to get approval from the Federal Aviation Administration (FAA) as well as the Federal Communications Commission (FCC). They also need permits from state and county regulators and may face some pushback from communities that don’t want a blimp flying in their backyard.

Once the company has demonstrated the technical and economic viability of the solution and has streamlined the process to site and permit SuperTowers in the United States, they will begin to expand into other countries.

“We are already engaging with a number of global and international carriers to plan this expansion into other markets,” says Glass.

Altaeros has been working closely with the FCC and the FAA from the beginning to meet all federal requirements to operate the SuperTower commercially. One condition for obtaining FCC approval lies in receiving an airspace permit from the FAA. The administration already has a regulation in place from the 1960s that addresses moored balloons. How a 21st-century aerostat complies is something the company is sorting through. “We want to make sure that we’re interpreting those regulations in the correct manner so that we put in all of the necessary safety systems,” says Glass. He says Altaeros also selects sites that have a minimal impact on the aviation industry.

Establishing broadband in rural areas is a high priority. In 2015, the FCC announced it would allow part of a radio spectrum band that was historically reserved for military radar to be used for flexible wireless broadband. In 2018, the FCC approved the so-called Citizens Broadband Radio Service to be used for LTE. The commission also made $6.5 billion available to the telecom industry in 2018 to establish fixed- and mobile-broadband networks to close the digital gap in America.

“In many ways, it’s a good time to be doing this,” says Glass.

Voice Interface: The Touchscreen of the Next Century

The Robot Made Me Do It:

How Robots are Changing the Lives of Children with Disabilities