Abdolkarim Mohammadi 2020년 9월 15일
⋮
답변: Abdolkarim Mohammadi 2021년 10월 21일
채택된 답변: Abdolkarim Mohammadi
I am running multiple simulations using parsim() with fast restart to accelerate execution. However, I have noticed that using parsim() with fast restart produces different results compared to sim() and parsim() without fast restart. I have attached a simple model containing only SimEvents blocks and the code for running it. The model has a variable named InterGenerationTime, which is used by the Period field of the Entity Generator block. A SimulationInput object is used to set InterGenerationTime for different experiments. The To Workspace block records the number of entities generated by the block. 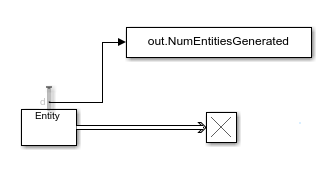 After running the code, the following figure is obtained. 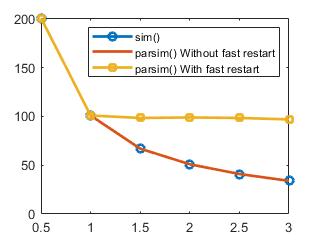 The first two lines are just as expected, but the third line (parsim() with fast restart) is not. I assume there is something wrong with my implementation. Any help is appreciated.

⋮
Looks like we get different results even in serial simulations. This might be an issue with Fast Restart and SimEvents and not parsim.

⋮
I concur with Rahul. If you change the sim() command to use fast restart you also get different behavior. The issue seems to be on the SimEvents side. If this issue is blocking you, please contact MathWorks Technical Support.
https://www.mathworks.com/support/contact_us.html
Example from my machine:
SimOutSim = sim(SimIn,'UseFastRestart', 'on'); 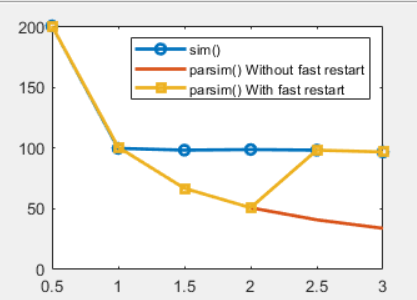 ⋮
Thanks Rahul and Reid. I informed MathWorks Technical Support about this. 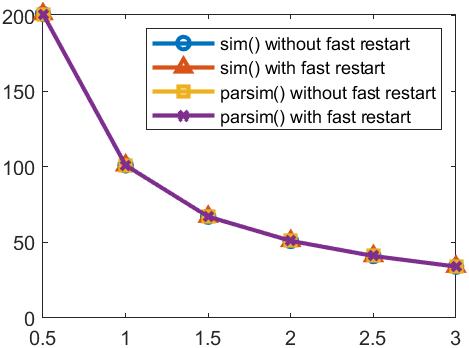 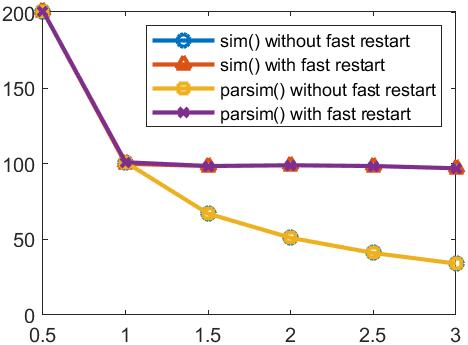 I magnified the plot and witnessed that there are three distinct results. 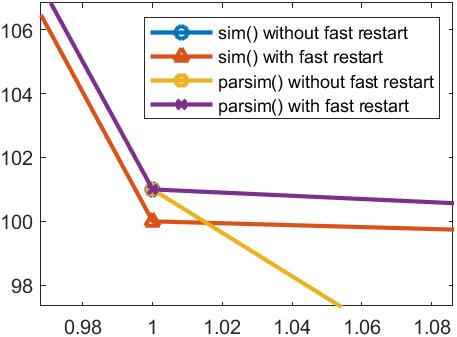 ⋮
Hi Abdolkarim,
In that case, you may want to work with MathWorks Technical Support further on this issue.