What is the IMU Sensor measuring in the Sensor Fusion and Tracking Toolbox?

Guillaume Charland Arcand 2019년 10월 18일
⋮
댓글: GUNHEE MOON 2021년 5월 14일
채택된 답변: Ryan Salvo
In the IMU Sensor of the Sensor Fusion and Tracking Toolbox where the world frame is NED and the sensor frame is Front-Right-Down it seems the IMU measurements are the opposite of the specific force, which according to [1] (eq. 3.97) is

where P is a platform frame or body frame. The same definition is given by multiple other well known authors such as [2]

where i is a space-fixed axis and

is a the position vector with respect to the origin. Same for [3] in which the specific force is defined as

is the gravitation force. Following the previous definition, an IMU at rest on a table in a NED world with an FRD coordinate frame should measure the force of the table pushing up on it. Thus the measurement should be

and I can confirm this with an SBG Ellipse IMU I have at hand. Now suppose the IMU slides forward at

on the table then the specific force measurement should be

.
It seems mathworks has decided to instead define the specific force as

Ryan Salvo 2019년 10월 18일
⋮
Hi Guillaume,
Thank you for the detailed explanation and apologies for the confusion.
You are correct that we have defined the specific force as gravity minus acceleration. This was done since the IMU sensor model and the correpsonding orientation filters are based off the Open Source Sensor Fusion package.
In this package, the accelerometer reading is defined as "Gravity-Acceleration" for the "Aerospace (NED)" reference frame. More information on this can be found in the "Coordinate Systems" document in the package link above.
Thanks,
Ryan

⋮
편집: Guillaume Charland Arcand 2019년 10월 18일
Thanks, while I disagree with this convention as it deviates from litterature (and will probably cause confusion amongst academics) I apreciate that it is at least somewhat documented. May I suggest Mathworks add documentation about this on the conventions page and the imu sensor page.

⋮
Thanks for answer. I was wondering about this also. Somehow it seemed unrealistic to me, as the platform acceleration and IMU output is indifferent in physics. But now i can understand it. 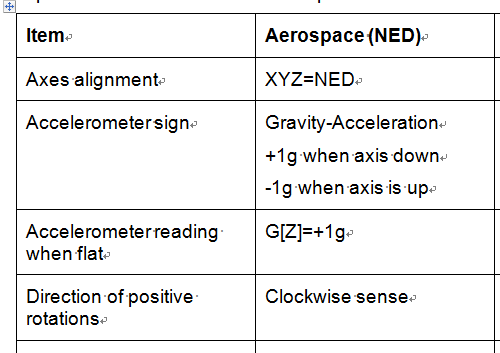