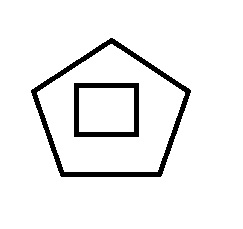 ⋮
i donot have the xy for small shape

⋮
편집: Image Analyst 2019년 3월 31일
Two non-useful comments.
Exactly what DO you have? An image? Set(s) of coordinates? Exactly how are you defining the smaller, square shape?

⋮
Note that pdist2 would most typically be used for the case where you have the coordinates of each of the vertices, and you want to find the two vertices that are closest to each other. That would not be the same as the two closest points: notice for example that the upper left corner of the rectangle is closer to an edge than to a vertex.
pdist2() can also be successfully used if you have the coordinates of every pixel in the objects, in which case it will return distances between pixels, which might not be exactly the same as theoretical distance that might apply for functions that the pixelated versions approximate. For one thing, pdist2 is happy to say that adjacent pixels are either distance 1 or sqrt(2) from each other rather than say that the "distance" between them is 0, because pdist2 would be looking at distances between pixel centers.
If what you have is coordinates of the vertices but you want to know distance to closest approach implied as if there are lines connecting vertices, then there are multiple approaches. One of the approaches is to use something like poly2mask() to render a polygon into pixels, after which you can use the pdist2() approach. There are also more mathematical approaches. 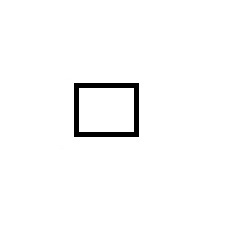 ⋮
If you used the rectangle() function, then you can get the coordinates of the corners from the 'Position' array you passed in.

⋮
img = imread('YourImage.jpg');
bw = im2bw(img);
[row_coords, column_coords] = find(bw);
Now for any given index, K, img(row_coords(K), column_coords(K), :) was non-zero.
Caution: this code finds white pixels. If your image is black on white, then you would use find(~bw) to find the black pixels.

⋮
Dear Walter Roberson
thank you for your replay, and sorry for wasting your time
But, how i can redraw these '[row coords, column coords]'to check if this is the actual coordinates of my shape

⋮
There is no real need to, but you could do
checkImage = false(size(bw));
for k = 1 : length(row_coords)
checkImage(row_coords(k), column_coords(k)) = true;
end
imshow(checkImage);
I suggest that you don't do this - it's not needed.
Again, why can't you simply attach your image and script???

⋮
[minDistance, minColumns] = min(distances);
minColumns is already a vector.
Note: you might need min(distances,2) depending on whether you need the minimum distance from each point in the first to any point in the second, or the minimum distance from each point in the second to any point in the first.
When you do a single min() call and the try to use find(), then that could be appropriate for the case where one point might happen to be exactly the same minimum distance to two more or points in the other shape, and you need to know all of them. In a situation such as that, you would generally get a different number of minimum points for each, which is a bit tricky to represent in a rectangular numeric matrix. Is this the situation that applies for you, that you need to know all of the points that are the same minimum distance? If so then typically a loop would be easiest.

⋮
Image Analyst
many thanks, now it's work correctly.