How can I overlap two images/pictures in Matlab?

Zubair Nizamani 2016년 7월 14일
⋮
편집: DGM 2022년 5월 15일
I am trying to overlap two pictures one of them is in .jpg file and other is contour plot from MATlab. I want to overlap on one an other to compare the contour lines. Does any body know what code can be or any manual way?

David Young 2016년 7월 14일
⋮
You can use hold to superimpose contour lines on an image. Here's an example:
% Get an image from a jpg file
img = imread('street1.jpg');
% display it
imshow(img);
% superimpose a contour map (in this case of the image brightness)
hold on;
contour(rgb2gray(img), 5);
hold off;

⋮
hello this is my first question in mathworks . im trying to analyse via fft some data but due to the fact that i have some gaps in my measurements and since i have one measurement every 30 min i'm having hard time to do that correct. thank you in advace ! Ted

⋮
What do you want to do with the rows that have missing measurements? Ignore them? Interpolate them?

DGM 2022년 5월 15일
⋮
편집: DGM 2022년 5월 15일
There's an awful lot of traffic on this question. I don't know that passers-by actually have the same intent, but let's assume some do.
The original question was about overlaying a contour map an an image. It almost reads as if both the contour map and the underlying image are (or are assumed to be) raster images. It's good advice to simply avoid such a scenario and plot the contour map on the image instead of recycling a rasterized copy that's likely been degraded due to any number of factors. There are a few points to consider in such an effort.
First of all, a contour plot uses the current axes colormap, but imshow()/image()/imagesc() also use the current colormap to display single-channel (grayscale) images. This causes problems if you want the two objects to use different colormaps. While you can work around it by creating duplicate axes, the simple solution is to just expand the image so that it doesn't require the use of the current colormap.
% some sort of image
%bgimage = imread('cameraman.tif'); % works for grayscale
bgimage = imread('jagblobs.png'); % or RGB images
% some sort of height information to make a contour map
heightdata = imgaussfilt(bgimage,20);
if size(bgimage,3) == 3
heightdata = rgb2gray(heightdata);
elseif size(bgimage,3) == 1
% need to expand single-channel images
% if you don't want them to share the same cmap as the contour
bgimage = repmat(bgimage,[1 1 3]);
end
% draw things
imshow(bgimage); hold on
contour(heightdata)
colormap(parula) 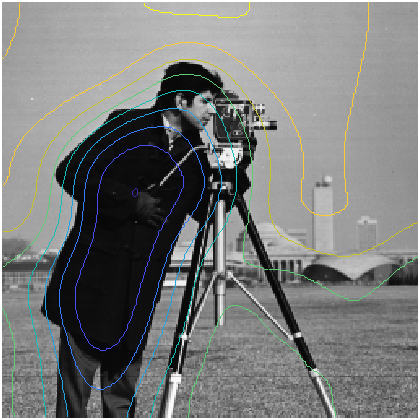 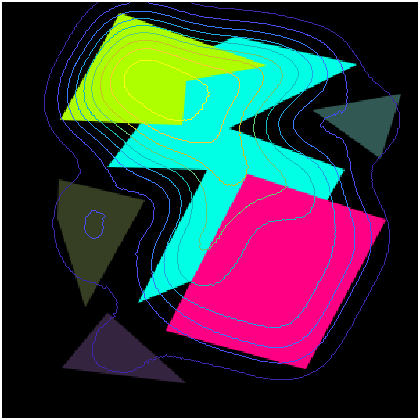 If you want to do the same with a contourf() plot, dealing with transparency is another issue to consider. See this answer for an example of a truncated semitransparent contourf() over an image. Take note of the chosen method and the link provided at the top for the opposite method.
That leaves the less-favorable prospect of trying to somehow overlay an image of a contour plot. I'm going to assume that the images have been registered/scaled/cropped somehow and ancillary plot features like labels, ticks, titles, and colorbars have been dealt with. I'm assuming you're not trying to do something like this: 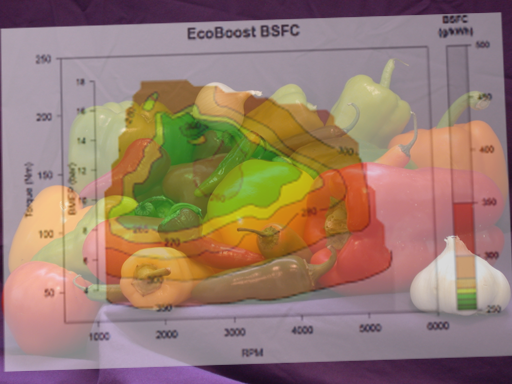 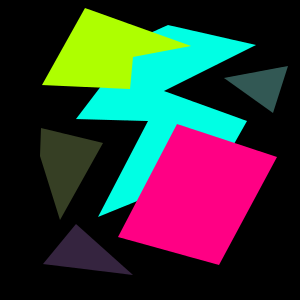 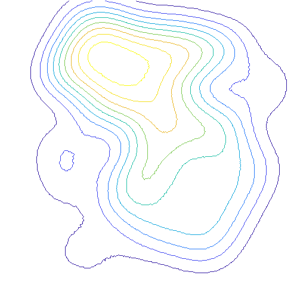 Can you use imfuse() to combine them? You could. If you're using the image registration tools, it might offer a little bit of convenience in that it supports a workflow built around them.
% some sort of image
bgimage = imread('jagblobs.png');
% some sort of height information
fgimage = imread('jagblobcontours.png');
outpict = imfuse(fgimage,bgimage,'blend');
imshow(outpict) 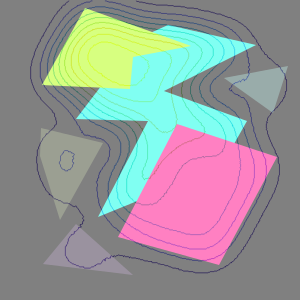 So you could use imfuse(), but the results are pretty terrible. This should be expected, as imfuse() is a simple visualization tool for image comparison, not an image composition tool. The closest it can do is above, which is a simple opacity blend. Even if that's all you want, bear in mind that it can't even be adjusted. All imfuse() can do is a fixed 50% blend (i.e. it's just the arithmetic mean). If you want anything else, you'll won't be doing it with imfuse().
You can do simple adjustable opacity blending without imfuse(), though bear in mind that you'll have to pay attention to the numeric class, data range, and number of color channels when trying to do this.
% some sort of image
bgimage = imread('sources/jagblobs.png');
% some sort of height information
fgimage = imread('jagblobcontours.png');
alph = 0.7; % at least it's adjustable
outpict = fgimage*alph + bgimage*(1-alph);
imshow(outpict) 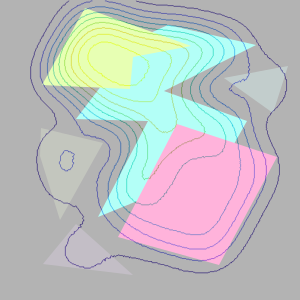 Either way, the results of an opacity blend are generally going to look terrible. It might be about all you can do for a filled contour, but for an unfilled contour, it's obtrusive.
Instead of using imfuse(), how about making a binary mask and combining the images that way?
% some sort of image
bgimage = imread('sources/jagblobs.png');
% some sort of height information
fgimage = imread('jagblobcontours.png');
% compose images
alph = ~all(fgimage>=254,3);
outpict = im2double(fgimage).*alph + im2double(bgimage).*(1-alph);
outpict = im2uint8(outpict);
% draw things
imshow(outpict) 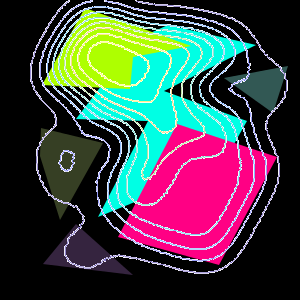 I wouldn't exactly call that good. If visual appearances matter (especially with smooth images), using binary masking techniques is likely going to be an exercise in creating ragged, ugly results.
What can be done better? There are a number of image blending methods that might work in certain cases depending on the content and intent, but for a plain contour map like this example, the following would be where I might start (if I had no other choice):
% some sort of image
bgimage = imread('sources/jagblobs.png');
% some sort of height information
fgimage = imread('jagblobcontours.png');
% compose images
fgimage = color2alpha(fgimage,[1 1 1]); % make white transparent
fgimage(:,:,4) = imadjust(fgimage(:,:,4)); % boost opacity
outpict = imblend(fgimage,bgimage,1,'normal','linear'); % compose
outpict = splitalpha(outpict); % strip extraneous alpha channel
% draw things
imshow(outpict) 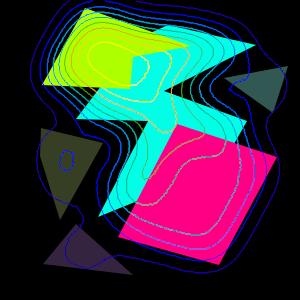 It's not the greatest, but the rasterized contour image was pretty terrible to begin with. The tools used in this example (color2alpha(), imblend(), and splitalpha()) are part of MIMT (on the File Exchange).
For other blending/composition examples, see this answer and the links therein. Those answers cover techniques based on MATLAB/IPT tools, as well as techniques based on MIMT tools.

⋮
many thanks for this answer,