Interp function error with my curve 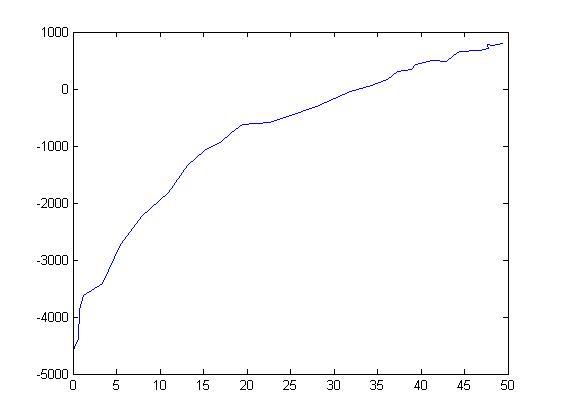 this is the plot :
plot(x,y)
I m trying to use:
xq= 5:45
vq2 = interp1(x,y,xq);
but I receive an error: Error using griddedInterpolant The grid vectors are not strictly monotonic increasing.
Error in interp1>Interp1D (line 346) F = griddedInterpolant(Xext,V,method);
What is wrong with my vector xq?
Thank you

John D'Errico 2016년 6월 28일
⋮
편집: John D'Errico 2016년 6월 28일
There is no simple polynomial that interpolates that curve. It clearly has a singularity at zero. The last time I checked, polynomials have no singularities.
Next, interp1 gets upset because you have at least some points that have the same x value. If two points have the same x value, but more than one possible y value, how do you expect interp1 to return a result? Which of that y values should it return?
Another possibility is that you might not have replicates, but that your curve has noise in the x variable, so that the curve appears to be non-monotonic in x. Again, it leaves you with a function that is not single-valued in the form y=f(x). So again, interp1 will not function.
The solution is usually to average the y values if you have replicates, replacing the replicates with a single point at that mean value. interp1 will now be happy. If it is just noise that made the x values non-monotone, then you might do a variety of things.
No matter what you do of course, you still won't get anything that is polynomial-like from that curve.
And since you have not attached the data itself, I cannot even suggest a viable model for this. (I can think of a few.) Really though, it is you who needs to pose a model, since only you know where the data comes from and what it means.