`svd` sometimes blows up - how to fix it?

⋮
편집: S 2022년 7월 18일
@KSSV If you do trace(pinv_modified(test_matrix)) repeatedly, sometimes it blows up and the values are different by 12 orders of magnitude and not even the right sign. This is an issue because I'm doing this calculation many times (on many different matrices).

Bruno Luong 2022년 7월 18일
⋮
편집: Bruno Luong 2022년 7월 18일
The thread subject is missleading, SVD does NOT blow up, what blowed up is PINV and it's normal given :
>> cond(test_matrix)
ans =
2.7819e+16
Well if you expect that you can get any stable solution without any careful regularized strategy, you must read lterature about "ill-posd problem".
It might be also that your matrix is wrongly built thus you get a singular system.

⋮
편집: S 2022년 7월 18일
@Bruno Luong So what specifically would you recommend here? The matrix is calculated from a physical system, so I'm not sure what can be done to modify that.

⋮
I recommend you read about ill-posed system and check your matrix. "The matrix is calculated from a physical system" is not a proof that your matrix is correct : the physics is wrong, the units used is not normalized, one forget to takeinto account the boundary condition or extra equaltion that makes the system wll-posed, a bug in the code, ... or simply what you are trying to solve is not physical possible. The math doesn't lie.

Christine Tobler 2022년 8월 5일
⋮
Ran in:
In short, the problem is that pinv_modified is based on a misunderstanding of the workaround here. The idea is to check if SVD fails and, in that case, compute the svd of a modified matrix (since it's unlikely to fail again there). Always modifying the matrix doesn't prevent SVD from failing on its own, and it introduces some randomness which is causing the problem here.
Here's what's going on: The matrix test_matrix has one singular value which is nearly 0. The pinv function will see this as below its tolerance for a non-zero singular value, and will not invert that last singular value when computing the inverse.
load test.mat
semilogy(svd(test_matrix), 'x') 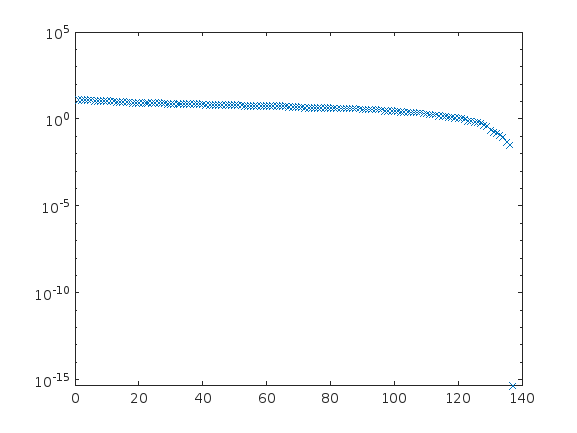