"We created a hardware-in-the-loop testing tool using Simulink, Simulink Coder, and Simulink Real-Time that enables us to very rapidly test control algorithms in a way that is simply not possible on an actual airplane." 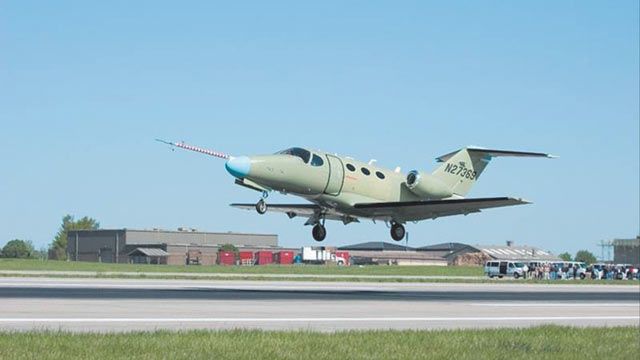 Citation jets from the Cessna Aircraft Company are known for their innovative technology and passenger comfort. When test pilots reported an issue with the aircraft's antiskid brake control system, Cessna engineers jumped at the chance to improve the product. The issue was intermittent, however, making it difficult to isolate and replicate.

Cessna engineers identified and addressed the issue by using MathWorks tools to develop a software model of the aircraft and run real-time hardware-in-the-loop (HIL) tests that simulated system behavior under a variety of conditions.

While the aircraft continued to meet its certification requirements, on some landings the prototype's brake control system applied and released the brakes more than necessary. Because the problem happened rarely, it was difficult to isolate. Cessna knew that certain combinations of runway and brake wear conditions played a role, but conducting hundreds of flights and landings while emulating these conditions would have been expensive and time-consuming.

The company needed to simulate the aircraft landing in a variety of conditions while examining the real-time operation of the control system. They considered purchasing a third-party aircraft simulation system, but cost and time constraints made that approach impractical.

"There are proprietary simulation systems available for a few hundred thousand dollars, and they typically have a two- or three-month lead time to get the system," notes Johnson. "We didn’t have that much in our budget, and we needed to be done, not just getting started, in two or three months."

With Simulink Real-Time they ran the code and executed the model in real time on commercial off-the-shelf hardware connected to the aircraft’s brake control system.

Using this testing environment, the engineers simulated hundreds of landings under different conditions until they could replicate the symptom consistently. During simulations, the team gathered data on 20 different parameters at a sample rate of 2000 Hz. With each real-time test lasting more than 20 seconds, more than a gigabyte of data was produced for each run.

After finding the dead band, the team developed a design that addressed the issue using additional parameters available from the aircraft controls and systems, and both the test pilots and the engineers were pleased with the new performance. Being able to find intermittent issues quickly and cheaply gives Cessna a competitive edge in a market that demands perfection.

Since this prototype antiskid project, Cessna has expanded its use of HIL testing, and now uses MathWorks tools to test all new brake control systems.