SIR model with recovered individuals may lose their immunity and become reinfected with the disease. But came with a failure about integration tolerances

Thanks all for your help!

⋮
Doesn't seem unreasonable. Perhaps there's even some signs of what is necessary for recurring influenca outbreaks in the oscillations - however, the reality is obviously far more complicated. 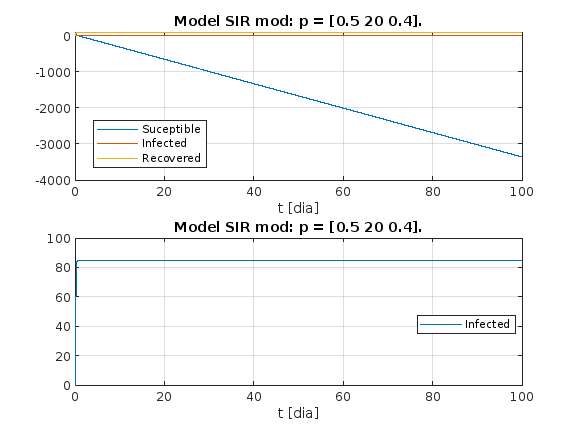 ⋮
Thank you so much! Oh it was a silly mistake indeed! Basically I was using the same variable for two diferente meanings.... Thank you!!!

⋮
@Julian Pereira, no it is not. The loss of R due to transition back to S couldn't be proportional to the amount of I. This makes it possible, at least in principle that the loss of R (delta*I) becomes larger than R which would lead to a negatve number of R...

David Goodmanson 2022년 9월 20일
⋮
편집: David Goodmanson 2022년 9월 20일
Hi Julian,
I have doubts about the equations, because with dq(1) = -S as you have, the equations are equivalent to
S = -beta*S*I - delta*R;
I = beta*S*I - gamma*I;
R = gamma*I - delta*I;
and it doesn't seem like recovered but reinfectible people should decrease the number of susceptible people. Should the upper right sign be positive? Also, should the lower right term be -delta*R instead of -delta*I?
Let's say whatever changes need to be done, or not, are done. The real problem is that the second line above redefines I, and then the new value, rather than the original value of I, is plugged into the third line. And the same thing is true for S redefined on line 1 and used on line 2, actually.

⋮
Hi David,
thanks for your answer and question! I got the model from this book: https://thalis.math.upatras.gr/~bountis/files/def-eq.pdf , page 235. Tha was the def eq: