how can i find more than one minimum points of the histogram?? ⋮
this is not what i want. it is giving the nos from 1 onwards.

⋮
OK.
But what does that mean?
You can adjust the 15 in my code to be whatever you want to select whatever x value (bin, gray level) you want. Attach your data if you want more help.

⋮
i was jst checking that code thats why i modified it.but i want three minimum point as i explained in the ques with the help of a graph. plz help

⋮
I'm having trouble with your English. You said "the minimum point is approximately 10,15,17." Well, point is singular but you list 3 gray levels, not one . So did you really mean "the minimum points are approximately 10,15, and 17." I have no idea .
And my code gave a single number so I don't understand what it means when you say my code is "giving the continuous no." Again, it's a single number , not a range of continuous anything .
And I don't understand how modifying the call to find to return 56 elements will get 3 of anything. I'm not sure how checking my code involved modifying it to return 56 elements instead of the one minimum element.
Like I asked you before to make it easier to help you "Attach your data if you want more help." Like the lena image or the histogram array. You are not attaching anything. I do not know why.
I really have no idea how to help you now, unless you attach data and clearly explain what gray levels or counts in your histogram you want to detect/extract/determine/find.

⋮
this fig is histogram of lena image.and in this histogram i want to find 3 minimum points other than 0.

⋮
You did not answer any of my questions at all - you just paraphrased the same unclear request. lena is not a standard image that ships with MATLAB, and neither is your code. Now, for the third time , I'm asking you to attach your data (image plus code). If you don't do that I'll assume you don't want anymore help.
Also again, explain if you want the minimum gray levels with non-zero counts or the minimum counts (at whatever gray level they happen to occur at).

⋮
actually i have divided the lena image into 4 non overlapping blocks, and generated the histogram of each and every block, now what i need to do is find the 3 minimum gray levels except zero.

⋮
% Check which bins, other than the first one at zero gray level,
% are not zero:
nonZeroBins = find(pixelCounts1(2:end) > 0);
% Add 1 to get bins referenced to the full array again.
nonZeroBins = nonZeroBins + 1;
% Extract only the 3 darkest gray levels.
darkest3GLs = grayLevels1(nonZeroBins(1:3));

⋮
sorry to say but now also it is giving the 1 2 3 as the output of the histogram of the lena image, that i send u.i want the minimum points on the x axis...

⋮
Look at the histogram and tell me what values (gray levels, bins) would you want it to return? Don't make me guess again. 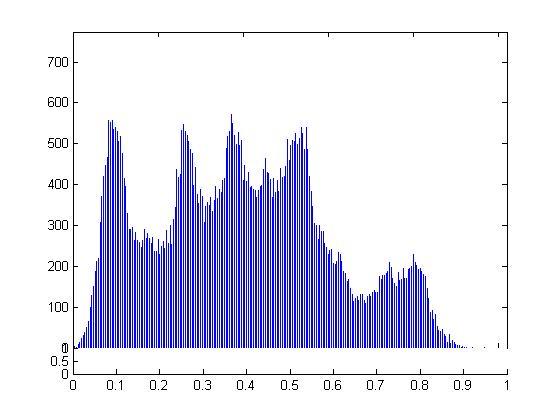 ⋮
First of all, I ran your code and it works find and does not give an error in imhist and does not display an image like you just showed. This is what it displays: 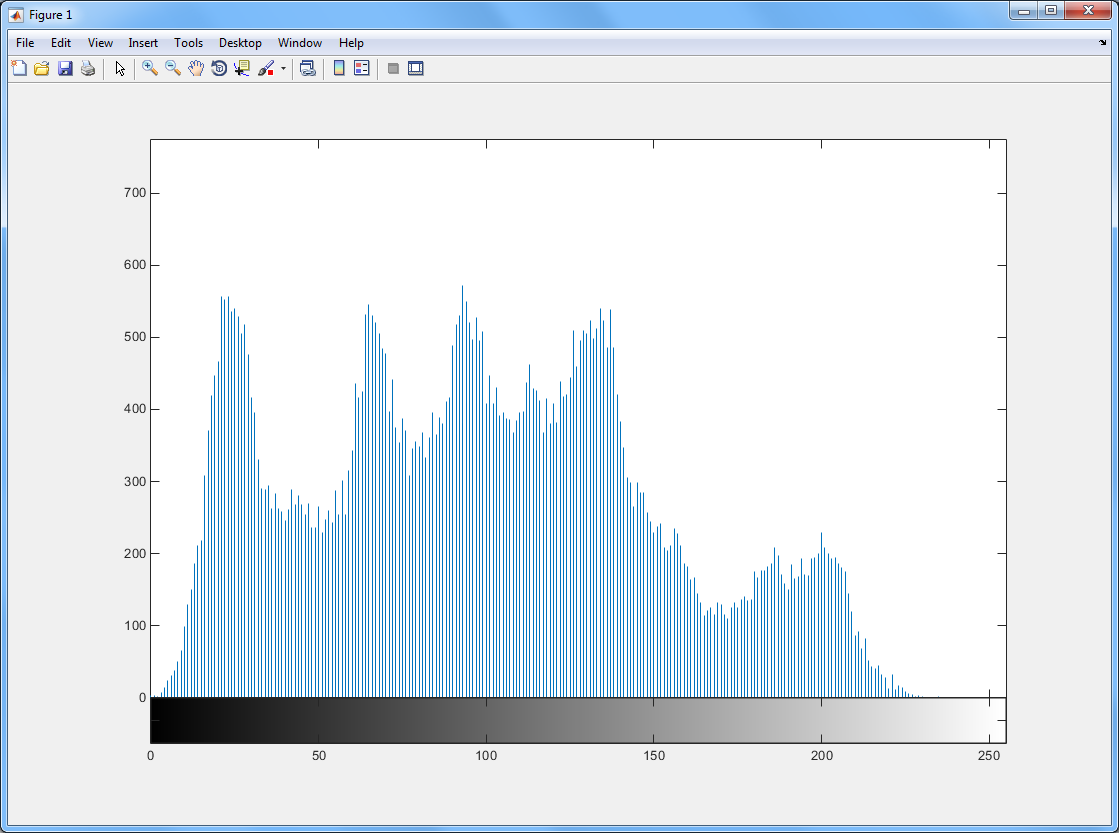 Somehow you must have converted a or b to double.
But I really don't know what you mean when you say you want 2 1 3 on the x-axis. Why? Instead of all the gray levels that are normally placed by the x-axis tick marks?

⋮
ok. i figured out that nw there is no error.. i need to find three minimum point or u can say 3 garay level with minimum value,they can be any where on the x axis.

⋮
i m not getting what u r saying... actually i need to make a algorithm i.e i m going to attach...

⋮
Oh, it's a homework problem, though I'd agree with you it's a very poorly written one with several notational errors and ambiguities. You were supposed to reveal it was homework in the beginning by tagging it as homework. I'll do that for you.
I've given you code to do much of your homework already. Which of the questions do you need a hint for? Or my guess at what the instructor is asking for (in an admittedly unclear manner in many of the questions)?

⋮
actually i need to find the points which is described in the section b step 2 of the algorithm. or is there a way by that we can store the histogram values in array or we sort that array, by that 3 minimum points we can get easily?

⋮
What is the difference between the H array and the h array?

⋮
Try this:
grayImage = imread('lena.jpg');
% Get histogram
[h, grayLevels] = imhist(grayImage);
% Sort the counts to find the gray levels with the fewest counts
% Let's assume they don't really want to count bins with no pixels in them
% because those gray levels are not present in the actual image.
% So set those bins = inf so they won't be sorted
h(h == 0) = inf;
% Now do the sort in order of increasing count:
[sortedGLs, sortIndexes] = sort(h, 'ascend');
% Find the 3 bins with the fewest number of counts in them
darkestGLs = sortIndexes(1:3)
% Sort in increasing order of gray levels
% Because even though the counts are sorted,
% the bin numbers (gray levels) could be anywhere.
darkestGLs = sort(darkestGLs, 'Ascend');
% Get the "b"s
b1 = darkestGLs(1)
b2 = darkestGLs(2)
b3 = darkestGLs(3)
% Get the counts in those bins:
hb1 = h(b1)
hb2 = h(b2)
hb3 = h(b3)

⋮
Yes. That's right. Because the three darkest bins each have one pixel in them. Do you not think that's right? Look at what your professor says:
"In the histogram, find three minimum point h(b1), h( b2), h(b3). Assume three of them satisfy the following condition: 0<b1<b2<b3<255."
So if the h array is the histogram, meaning that it is an array holding the counts of pixels having each gray level, then, assuming you don't want to consider gray levels that have no pixels with that intensity, the minimum h(bin) would be where h(bin) equals 1, meaning it has one pixel with that gray level in the image. Then I found three gray levels that had 1 count. Why are you uncertain about this?

⋮
Anamika, there are probably lots of bins that have only one count in them. Which three do you want?

⋮
are yr to how did i found that levels as the ans.

⋮
I don't know what that means. What does the word "yr" mean in English?

⋮
that is a hindi word, that i wrote in hurry...'how did i found that points as the answer?'.

⋮
I'm afraid I don't know how to help any differently. I gave you code that will answer the homework question but, for some reason that you can't explain, you don't like it. You say it doesn't give the 3 lowest/shortest bins, but it actually does . So good luck with it - finding your own algorithm.

⋮
do one thing, attach the image and the histogram and the result...

⋮
the code is not giving the sorted value for the image.

⋮
it is giving the interval from 1 to 10 and giving its count..

⋮
Yes, because data is just an example containing values between 1 and 10. Then I sorted the count in ascending order, and sorted the values along with it. The first element of the sorted counts is belonging to the value that occurs least often (i.e., the minimum of the histogram!), the second element is the second minimum etc. If you run the code and look out the outputs you may see what happens.

⋮
it is not sorting values as per the requirement. i want sorted values on x axis with respect to y. means the value on the x axis having the lowest value on the y axis, that should come first and so on.