How do I hide or resize poseplot local axes?

Floris-Jan Nieuwenhuis 2022년 5월 23일
⋮
댓글: Floris-Jan Nieuwenhuis 2022년 5월 30일
채택된 답변: Ryan Salvo
I'm trying to plot a view of my stl mesh file in poseplot. However, the actual object seems to be dwarfed by the set of axes that the poseplot function has added to the mesh file. Is there a way to resize the axes (or remove them altogether) so that the object is properly visible? 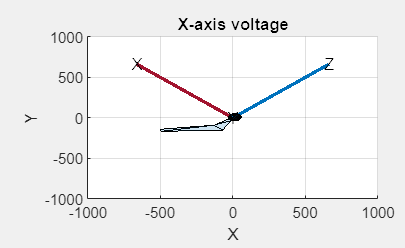 Ryan Salvo 2022년 5월 25일
⋮
Hi Floris-Jan Nieuwenhuis,
If the ScaleFactor Name-Value argument does not resolve the scaling issue, I recommend trying the plotTransforms command instead, as it provides more explicit controls for the length of the axes.
Thanks,
Ryan

⋮
편집: Floris-Jan Nieuwenhuis 2022년 5월 25일
ScaleFactor also scales the mesh, and I want to change the size of the axes relative to the mesh. I think my question was improperly written. When I mean axes I mean the (in this plot) red and blue axes that the poseplot function attaches to the object. The object itself becomes difficult to see because the plot zooms out so much to include the disproportional local XYZ axes. plotTransforms is very helpful, the only issue is that there is no way to scale the mesh with plotTransforms, which means that the mesh is dwarfed by the quiver3 object that I have in the same plot (which constantly changes). Ideally I'd like to plot just the mesh without local axes, so that you can see the quiver3 object in relation to the mesh.

⋮
To remove the frame axes in the plot, you can search for them in the axes handle returned by plotTransforms and then delete them.
figure
ax = plotTransforms([0 0 0], quaternion(1,0,0,0), "MeshFilePath", "groundvehicle.stl");
% Remove frame axes objects.
frameAxes = findobj(ax, "Type", "Line");
delete(frameAxes);
Please note that you will have to perform a more robust check on the output of findobj if your figure contains other Line objects that should not be deleted.

⋮
I've tried a few configurations with the plotTransforms command, but utlimately not being able to scale the model has a huge disadvantage in my application. I'll stick to the poseplot command.