gurjeevan singh 2022년 5월 15일
⋮
댓글: dpb 2022년 5월 16일
채택된 답변: Star Strider
Dear Sir/Madam,
Im having difficulty plotting my data in my table to a bar graph. I have renamed my columns of my table and wish to plot a bar graph of the data with the column heading under each bar. Im a beginner in matlab and Ive had a look at the bar help website, but cant seem to solve my issue
Im getting the error: Input arguments must be numeric, datetime, duration or categorical.
I would greatly appreciate help on my problem. Thank You in advance
Best Regards,
Jeevs S
newNames={'Protein A','Protein B','Protein C','Protein D','Protein E','Protein F','Protein G'...
,'Protein H','Protein I','Protein J','Protein K','Protein L''Protein M','Protein N','Protein O','Protein P',...
'Protein Q','Protein R','Protein S','Protein T','Protein U','Protein V'};
T=array2table(data1, 'VariableNames', newNames);
bar(T);

⋮
Dear dpd,
Apologies for the error in the data table. I have updated the data, given by 'data2'
T=readtable('data2.xlsx');
head(T);
Thank you for having a look at my problem
Jeevs S 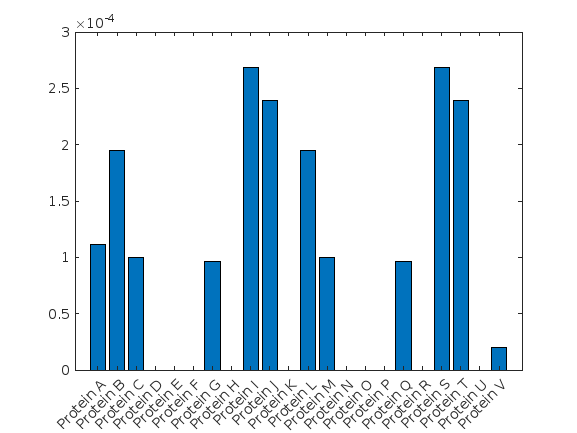 ⋮
Yeah, if ignore that record and fixup the number of variables one way or t'other (I just named the ones in the file instead of making up another, then
tSinghBar.Properties.VariableNames=compose("Protein %c",'A'+ [0:size(tSinghBar,2)-1].');
bar(categorical(tSinghBar.Properties.VariableNames),tSinghBar{2,:})
produces the same plot for the first 20 instead of for 21 where the x axis is categorical and the names come along "for free".

⋮
Thank you both dpd and StarStrider, both of your solutions have solved my problem. I greatly appreciate the massive help.
Apologies for the error in the data, I have updated the data in the original post.
In StarStrider's post, does the below code set the names in 'newnames' to every bar by nume1 ?
1:numel(newNames)
Also, in dpd's solution, what does the first line of code do? im having trouble undertstanding the function inside compose, copied below:
tSinghBar.Properties.VariableNames=compose("Protein %c",'A'+ [0:size(tSinghBar,2)-1].');
Thank you both for helping me. Have a great week !
Mr Singh

⋮
@gurjeevan singh -- break it down from inside out --
compose("Protein %c",'A'+ [0:size(tSinghBar,2)-1].')
size(tSinghBar,2) % number columns actually in the table
% could have used numel(tSinghBar.Properties.VariableNames) as well
'A'+ [0:size(tSinghBar,2)-1].' % build vector of that many elements
% try it at command line -- MATLAB adds automagically and conversts to double
compose("Protein %c",'A'+ [0:size(tSinghBar,2)-1].'); % and convert to the string appending letter
% NB the -1 for zero-based counting to add to the starting letter
Then set the variable names in the table to the result. Done deliberately in part to illustrate such manipulations can be automated to use the available data -- you don't need to type all those in by hand and you can make the result match the table size read in to eliminate the mismatch problems.
We had already illustrated using colon expansion with a known range in the last Q? in creating the categorical variables set names as something like
"Protein "+['A':'C'].'
using the overloaded plus operator on the string class; this illustrated how to get the letter range programmatically as well.

⋮
Thank you both for your explanations @dpb @Star Strider.
Im working more on analysis with similiar datasets. This is of great help !
Thank you !

⋮
OK, you fixed the mismatch it appears, but what's the point of having the ordinal numbers for the first row here? All that does is confuse readtable on import in thinking that you have two lines of data unless you go to the trouble of specifying 'NumHeaderLines',1 and even if do that then you get the non-helpful column variable names 'Var1, 'Var2', ...
Why don't you set the first row to the real variable names in the spreadsheet to start with -- would make it much easier to read/use from the user-friendly aspect inside Excel. Even if you just use 'A', 'B', etc., would seem to help immensely.(*)
Alternatively, as shown you can build names programmatically, but if you're going to do that and the Excel file is being built automatically not by hand, then why not just forget the header line entirely?
Also, depending on how/where this is going, a table may not be the best way to do this -- as the example showed, if it is a table, to plot the columns as the independent variable means pulling the data out as an array and maniuplating the variable names -- or having a duplicate set of variable names which is redundant data to manually write as did SS.
It would seem better in this case to order the spreadsheet the other way -- list the Proteins going down by row and the values by column -- then you can use the first column as the independent variable "Protein" and the second with whatever it is that that number is measuring. If there are more observations or things measured, they become additional columns. That organization would simpify the code even further; you could read the protein ID as categorical on import, even. That organization would also have the effect of making the sheet easier to read -- 20 rows shows easily on a screen; 20 columns "not so much"...
(*) ADDENDUM: If there is some reason to use 1:N as an ID instead of the letter or other label, then I'd suggest (if also must keep the horizontal organization)
tData=readtable('yourfile.xlsx','ReadVariableNames',1);
Then the column names will be "1", "2", ... "N" which are easy to address dynamically progrmmatically (not that other forms can't be, just is especially trivial). I'd still think the column orientation would work far better here, though.

⋮
@dpb
Thank you for the feedback. The data above is part of a larger dataset and converting to columns would not be ideal for the data given. However, I most definetly agree with your points above. Thank you for helping with my problem and giving more insight into Matlab coding

⋮
Attach a representative section of the dataset...there still may be "more better" ways to import/use it...we can only see through a tiny peephole here. 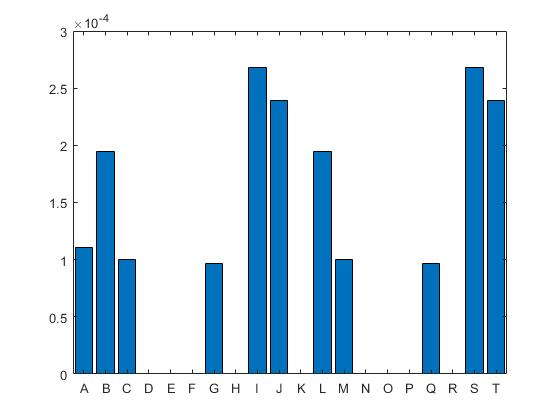 I attached the updated/reformatted Excel file for your convenience/viewing pleasure...

Industries Biotech and Pharmaceutical Genomics and Next Generation Sequencing