“As a startup company, we realized that we needed to do everything we could to accelerate the process. Without MATLAB and Simulink products, documentation, and support and the MathWorks startup program, costs would have increased for Humotech and our customers to the point where the solution would not have made economic sense.” 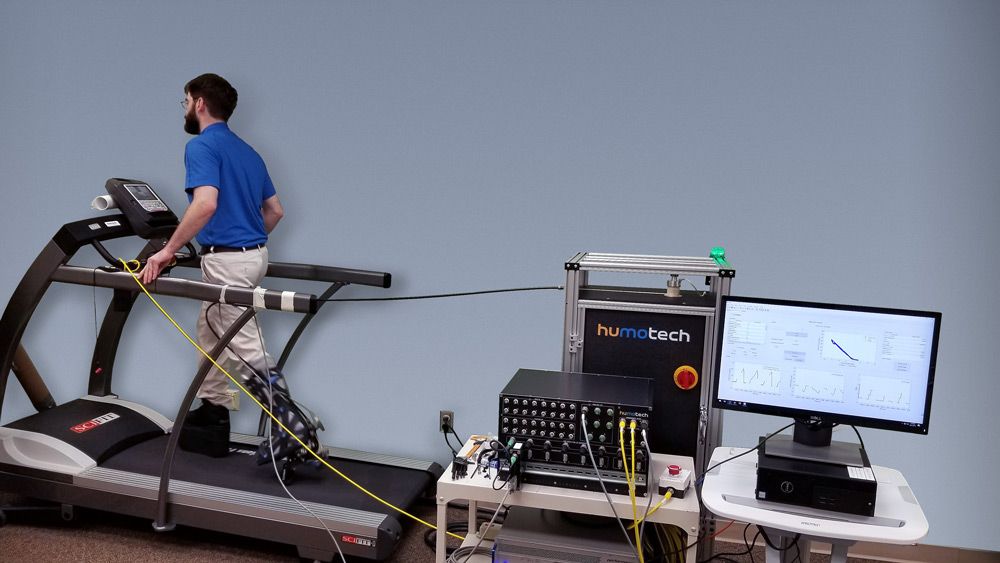 Testing new designs for wearable assistive devices, such as prostheses, orthoses, and exoskeletons, can be time-consuming because the device often must be removed, modified, and then refitted whenever a design parameter is even slightly changed.

Humotech, a startup based in Pittsburgh and incubated at Carnegie Mellon University, has developed a programmable robotic system that emulates the physical characteristics of wearable assistive devices. The Caplex system, which began as a Ph.D. research project, enables researchers to systematically vary the behavior of a single device, giving the user the physical sensation of wearing a variety of devices while actually wearing just one.

Humotech developed the control system for Caplex in Simulink® and took advantage of the MathWorks startup program to help evolve the technology from its academic roots to a commercially viable product.

“Transitioning from academia to a startup private company is full of expensive surprises, and one of those is the cost of software tools,” says Josh Caputo, CEO and founder of Humotech. “We are funded entirely by sales of our product, so the support and special pricing we received from MathWorks has been instrumental to our success throughout our early stages.”

To keep the wearable component of the Caplex system as lightweight as possible, it is tethered to the robotic components and parts. As a result, the controller had to be designed to manipulate the mechanical aspects of the device remotely. It also needed to be both usable out-of-the-box and fully customizable.

Caputo wanted to minimize operating expenses as the company moved through the Project Olympus incubator program at Carnegie Mellon University and into its startup phase as an independent company.

Humotech created a Simulink library that ships with the full control model. Customers can use blocks from this library to extend or customize the controller.

Once a customer is ready to test controller behavior on the Caplex device, they deploy it on Speedgoat real-time target hardware using Simulink Real-Time™. They can then iteratively tune the model and its parameters either by making changes directly in Simulink or by using a standalone application developed by Humotech.