Students Learn Career Skills as They Shoot for the Stars

At the start of the space race, large government organizations invested heavily in programs to explore outer space. More recently, commercial companies such as SpaceX, Virgin Galactic, and Blue Origin have entered the space business. These companies develop rockets to deploy satellites, restock the International Space Station, and possibly enable commercial space travel in the near future. But far removed from the big-budget operations of governments and commercial programs, a third group has been reaching for the stars: Student teams at universities around the globe are developing and launching rocket technology and learning some big lessons along the way. Adding to the challenge, these student organizations work on tight budgets, and their ranks turn over every four years as team members graduate. 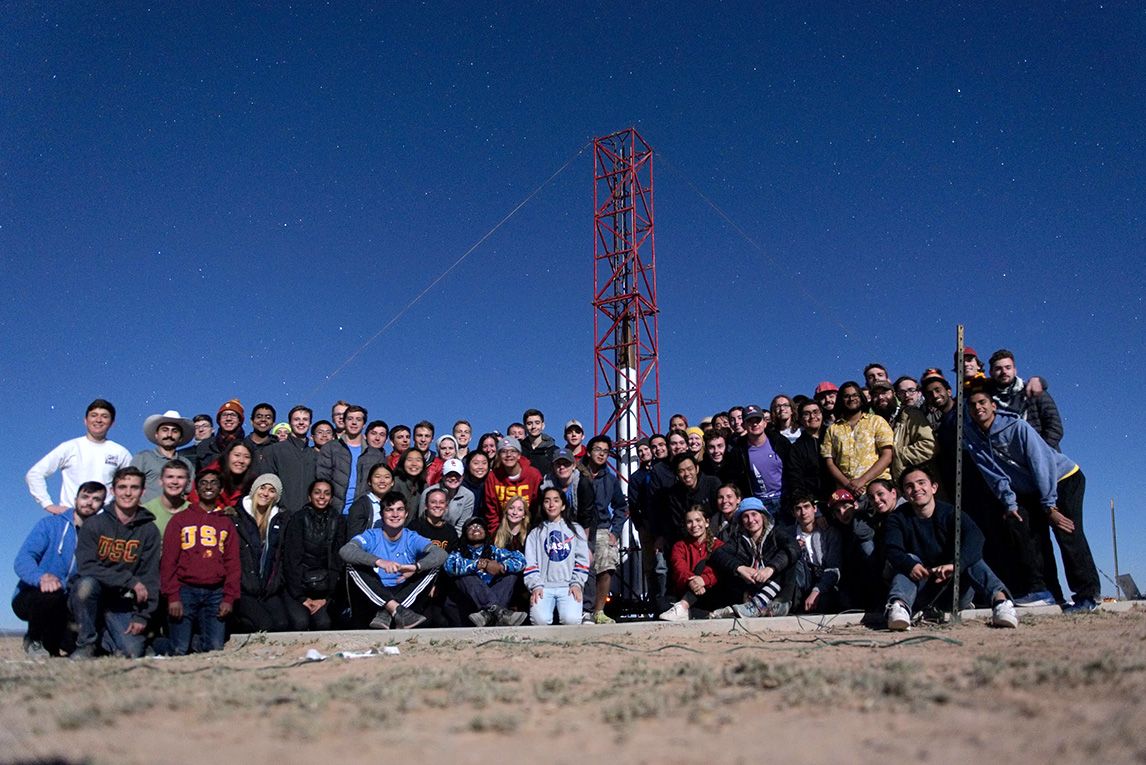 The University of Southern California’s Rocket Propulsion Laboratory is the first undergraduate group to launch a completely student-designed and student-built rocket to reach outer space.

The endeavor to launch rockets to the thermosphere requires precision engineering where speed, power, and accuracy must all come together under high-stakes scenarios. And while student groups have successfully built and flown satellites for quite some time, none have launched a rocket to outer space—until now.

On April 21, 2019, the University of Southern California’s Rocket Propulsion Laboratory (USCRPL) became the first undergraduate group to launch a completely student-designed and student-built rocket that crossed the Kármán Line, defined by the World Air Sports Federation as 100 kilometers above Earth’s sea level. Their rocket, the Traveler IV, reached 103,632 meters, with a margin of error of +/- 5120.64 meters (340,000 feet +/- 16,800 feet), into the air, completing the organization’s 15-year mission to be the first college group to reach outer space.

USCRPL is a team of approximately 80 students from various fields of study. USCRPL has one faculty advisor and receives support from more than 20 commercial companies. The team’s goal: help undergraduate students gain experience working on an engineering team that is similar to what they will find in industry. The team works together to create solutions to real-world engineering problems that aren’t answered in a textbook.

The main engineering teams in USCRPL are avionics, composites, propulsion, recovery, and simulation. They also have teams that work behind the scenes, including operations, media, infrastructure, and production systems.

Much like their commercial counterparts, the USCRPL team relies on system simulations to design and test their rocket. The simulation team solves these and other system simulation issues in much the same way their professional counterparts do, knowing the experience gained will be helpful as they graduate and move to careers in aerospace firms or other related fields. Experience with hands-on design and commercial software is key.

Luke St. Regis, head of the USCRPL simulations team, works with two other students on creating a custom flight simulator and a custom solid motor simulator. A senior who is majoring in computer science and astronautical engineering, he says that MATLAB® helps the team look at a lot of different scenarios at once.

“We use our simulations for two different goals,” said St. Regis. “First, during the design phase, we use the motor simulator to come up with a motor design, the desired thrust, and burn length profiles. Then we use that data to design the actual body of the rocket and determine its length, shape, the nose cone, and the shape of the fins, as well as just how big it needs to be to reach the desired altitude.

“Using a script I wrote, MATLAB would change the input slightly so that it would sweep through three input parameters at once. That generated thousands of combinations of the three dimensions on the fins.”

The fins are a critical component in the design of the rocket. Rockets require a huge amount of thrust, and the atmosphere can cause the rocket to wobble. Fins help to change the rocket’s center of mass and keep it stable and pointing where it should go. To design the fins for the Traveler IV, the team ran a simulation of the first 30 seconds of the launch, which is the only time the rocket is in the atmosphere, and tested out different parameters of fin design like shape and length.

“Using a script I wrote, MATLAB would change the input slightly so that it would sweep through three input parameters at once,” says St. Regis. “That generated thousands of combinations of the three dimensions on the fins. Then we could extract the lowest static margin, plot those all in 3D, and see what sort of dimensions we wanted the fins to have in order to achieve that good flat profile.”

A large part of the design process is simulating the launch, including motor performance and flight trajectory. The simulations make use of data collected in previous launch attempts. To collect data, rockets are equipped with multiple sensors that can relay positioning, speed, temperature, direction, and more. These variables are also tested in the flight simulator.

“Moving on through to the launch phase, the flight simulator is actually how we aim the rocket,” said St. Regis. “We match the parameters with the measured values from the real rocket. We pull in live wind data to calculate the desired flight path.”

Rockets are difficult to design and build because each test means starting over. And student groups also have to factor in that membership completely turns over every four years as students graduate and move on. By continuing to work in MATLAB, the data and simulations that previous teams have collected and built can be seamlessly passed down.

Still Reaching for the Stars

The success of Traveler IV was a culmination of 15 years of work. For each previous rocket that didn’t make it to space, team members learned something that they implemented on the next, which eventually led to success. Many of the previous rockets served as a platform to learn theory and develop the manufacturing methods, and the Traveler series was the culmination of this knowledge.

“Next, we will refine the design of our successful rocket to make it lighter and more optimized,” says Michael O’Neill, USCRPL media lead. “We hope to add enough capacity for a useful payload, such as a CubeSat, on a suborbital spaceflight.”

A single-stage rocket is great for meeting this goal, which the USCRPL has had since its founding in 2005. But to launch a payload like a satellite into space, the team will need to develop a two-stage rocket.

The team is working on many development projects, such as exploring the use of liquid fuel. Liquid fuel is much more volatile than the solid fuel the team has been using but will allow for increased control and thrust to carry a large payload and get it into orbit. These rockets are even more expensive to build than solid-fuel rockets, but the USCRPL wants to claim the title of the highest amateur rocket launch in history, which is about another 15,000 meters higher than the record-setting altitude of the Traveler IV. 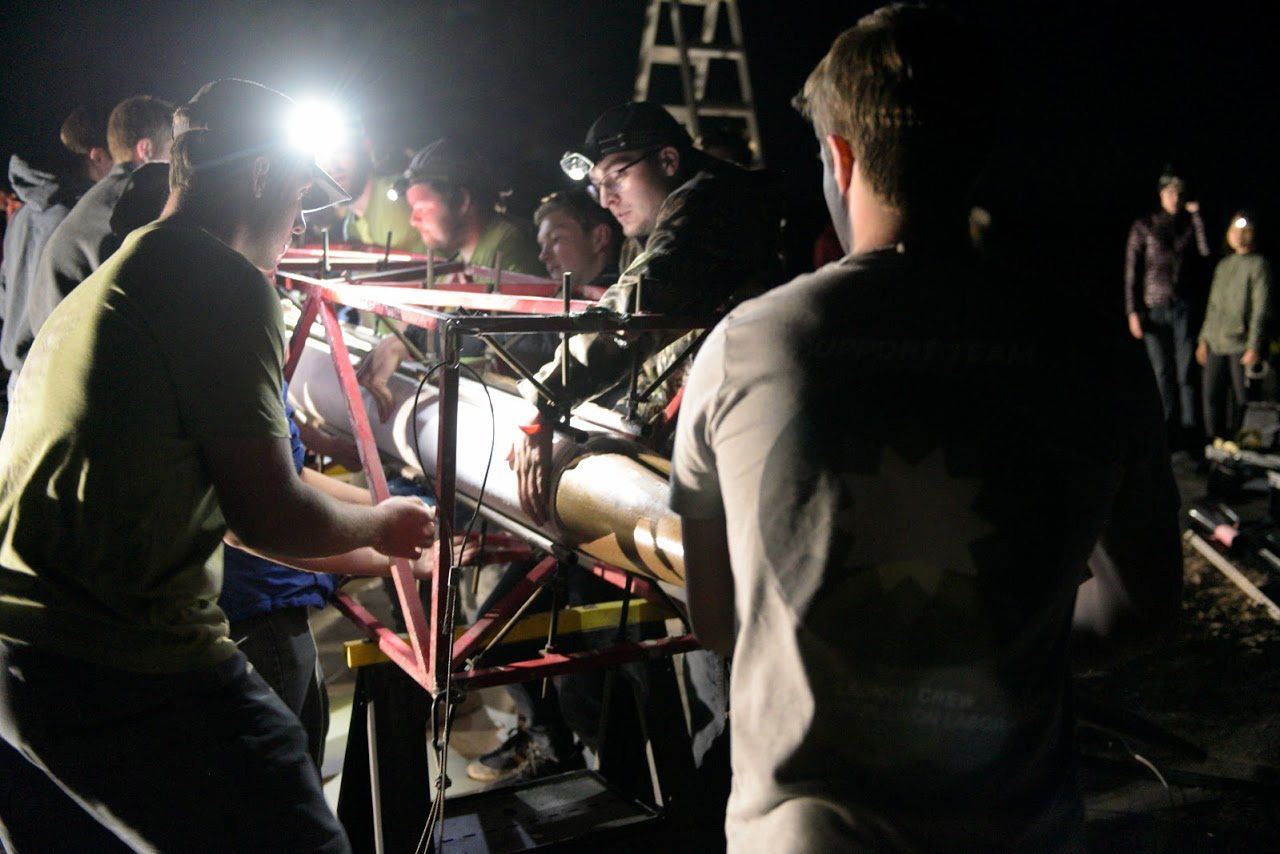 The real-world experience gained during their time with USCRPL has turned into careers in aerospace for many of the past members. “Many of our members go on to work in the space industry for NASA or companies such as SpaceX and Blue Origin,” says O'Neill. “Some have even gone on to create their own companies, like Relativity Space.”

Dennis Smalling, lead engineer for USCRPL during his senior year and now a propulsion engineer at SpaceX, says, “My time with USCRPL was the most valuable part of my college experience.

Seeing the Road Ahead

Long-Distance Robot-Assisted Heart Surgery and Beyond