Differential Equations and Linear Algebra, 1.6: Integrating Factor for a Constant Rate, a

The integrating factor e-at multiplies the differential equation, y’=ay+q, to give the derivative of e-aty: ready for integration.

OK. This is our last look at the first order linear differential equation that you see up here. The dy dt is ay, that's the interest rate growing in the bank example. y is our total balance. And q of t is our deposits or withdrawals.

Only one change. We allow the interest rate a to change with time. This we didn't see before. Now we will get a formula. It will be a formula we had before when a was constant. And now we'll see it. It looks a little messier, but the point is, it can be done. We can solve that equation by a new way.

So that's really the other point. Everybody in the end likes these integrating factors. And I will call it m. And let me show you what it is and how it works. What it is is the solution to the null equation, with a minus sign. With a minus sign. dM dt equals minus a of tM. No source term. We can solve that equation.

If a is constant-- and I'll keep that case going because that's the one with simple, recognizable formulas. If a is a constant, we're looking for the function M whose derivative is minus aM. And that function is e to the minus at.

But what have I got here? Factor out an M and that's just dy dt minus ay, dy dt minus ay is q. So when I factor out the M, I just have q. All together, this is M times q. Look, my differential equation couldn't look nicer. Multiplying by M made it just tell us that a derivative is a right-hand side. To solve that equation, we just integrate both sides.

So if you'll allow me to take that step, integrate both sides and see what I've got, that will give us the formula we know when we're in the constant case, and the formula we've never seen when t is varying. And then I'll do an example. Let me do an example right away.

Suppose a of t, instead of being constant, is growing. The economy is really in hyperinflation. Take that example if a of t is, let's say, 2t. Interest rate started low and moves up, then growth is going to be faster and faster as time goes on. And what will be the integral of 2t?

The integral of 2t is t squared, so M, in that case, will be e to the minus a t squared. Sorry, there's no a anymore. a is just the 2t. e to the minus t squared. With a minus sign, it's dropping fast. In a minute, we'll have a plus sign there and we'll see the growth. Do you see that this is the integrating factor when a of t happens to be 2t?

And again, I'm going to put in an integration variable different from t just to keep things straight. OK. So now I've got a formula for y. It involves the M. Actually, the y is multiplied by M, I better divide by-- first of all, do we remember what M of 0 is?

OK. And now-- oh, let me put that on the other side so this will be equals y of 0 plus that. OK. And now if I divide by M, I have my answer. So those are the steps. Find the integrating factor. Do the integration, which is now made easy because I have a perfect derivative whose integral I just have to integrate. And then put in what M is, and divide by it so that I get y.

OK. Oh, just a moment. I'm dividing by M and I had an M there. Oh, wait a minute. I haven't got it right here. So I want to know what is M at time s divided by M at time t? So this was the integral from 0 to s. This is an integral from 0 to t. And both are in the exponent.

We've solved an equation that we hadn't been able to solve before. That's a small triumph in differential equations. Small, admittedly. I'd rather move next to non-linear equations, which we have not touched. And that's a big deal. Thank you. 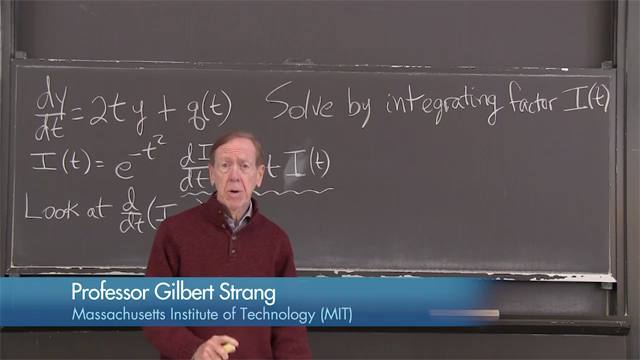