Convergence can't be reached in lsqcurvefit

and ω are vectors of the same length, the fitting coefficients are

. The goal is to identify the coefficients that minimize the difference between experimental

.
I tried to use lsqcurvefit, but the residual norm ended up being ~4e7. I am not sure where the problem could be. Below is my code.
I have also tried to fix the values of

to 10, 1, 0.1 so there would be fewer unknowns. But that did not lead to convergence either. I have also contructured the problem to be solved with fminsearch to search for the minimal squared norm of difference between experimental 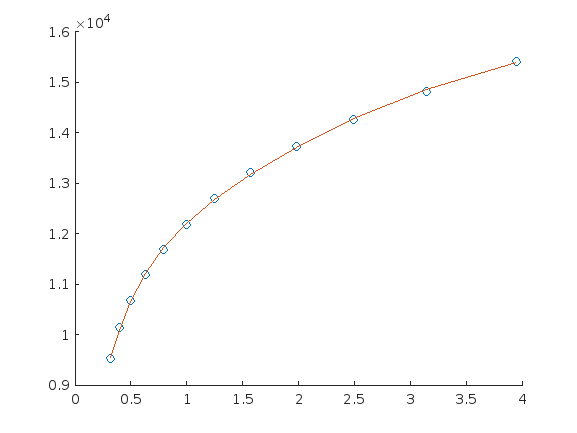 ⋮
I edited your post a bit to
resnorm is about 9e3, which seems fairly reasonable, and certainly not 1.e7.
But, maybe I am missing something. I don't typically fit with lsqcurvefit.

⋮
7 parameters for 12 measurements - this will give a nearly perfect fit for many types of model functions (see above).

⋮
You have significant problems with the lsqcurvefit running out of iterations, depending on the exact starting point (you need more than one starting point for robustness if you believe you are getting caught in local minima.)
How many iterations do you need? Well, in my testing, 1 million (1e6) are not enough at least half the time.
When you get a really large number of iterations like that, it is not uncommon for that to mean that the minimizer is chasing an asymptope that is outside of the real minima. Think of a long slope on the outside of a volcanoe; a minimizer that starts outside might well end up descending the outside slope instead of ever checking to see whether perhaps there is a better solution up-slope (pit in the center)

⋮
Hello @Alex Sha, thank you very much for your reply! Could you please share some details about how to get to the global solution? Currently I often get the warning at the end, saying "local minimum possible".

⋮
Hello @Walter Roberson, thank you very much for your insightful comments! I also tried to increase the number of iterations, but it would run into problems of "Relative magnitude of search direction is smaller than the step tolerance" or "Change in the residual is less than the specified tolerance". The values of g1, g2, g3 and ge should be with the magnitude of 1e3~1e4, and r1, r2, r3 should be non negative numbers no larger than 50. I think I could bound the coefficient, but would you have other suggestions on how to break out of the local minimum? Thanks a lot!

⋮
Hello @Torsten, thank you! I started to think about whether a global minimum is possible.

⋮
Hello @the cyclist, thank you for editting the syntax! I was wondering what went wrong since it gave an error message immediately after I ran the code.

⋮
편집: Matt J 2022년 11월 26일
@Shengyue Shan The plot you posted looks like a very good fit. Are you really hoping for better? I can't imagine it gets better than that.

⋮
"Relative magnitude of search direction is smaller than the step tolerance" or "Change in the residual is less than the specified tolerance"
Those are not errors.
There are comparatively few situations in which lsqcurvefit can say for certain that it has definitely found a solution.
The lsq part of lsqcurvefit means "least squared" -- so the code is trying to minimize
sum( (f(parameters,xdata)-ydata).^2 )
if it encounters a set of parameters such that the sum is exactly zero, then it can give exitflag 1, "converged to a solution".
Suppose that instead it encounters a set of parameters such that sum( (f(parameters,xdata)-ydata).^2 ) is 1e-300 and that for each parameter in the list, varying the parameter to the next higher and next lower value always gives a value that is at least as large as 1e-300, possibly higher. Has it found a "solution" or has it not found a solution?
Maybe it has found a solution and the 1e-300 is just the inevitable result of the fact that operations on floating point values can never be exact. For example there is no representable IEEE754 Double Precision floating point value x near π such that in double precision

is exactly 0. We know mathematically that

is exactly 0, but π is an irrational value and if you truncate it to any finite number of digits

then it cannot mathematically equal 0 and in practice sin(closest_53_bit_representation_to_pi) turns out to not be 0. If lsqcurvefit() encounters a situation like that where the residue could plausibly be attributed to floating point round-off then should lsqcurvefit() confidently give out the exitflag saying that Yes, it has definitely found a solution ?
But what if the function to be fitted turned out to be (x-pi)^2+1e-150 ? Then mathematically the only way to get an exact zero out of that would be to make x complex-valued. So maybe that residue of 1e-300 is a "hard" residue that cannot be eliminated. Should it excuse the 1e-300 residue in that case and confidentally give out the exit flag saying that Yes, it has definitely found a solution?
Can the function distinguish between the two cases? NO, not in the case of a general model. It would have the apply the symbolic toolbox to the model and do mathematical analysis of the expression in order to prove that it was in one situation (lack of exact convergence is solely because of floating point limitations) or the other (lack of exact convergence is because of something inherent in the model considering real valued coefficients.)
The two statuses you mention are two different conditions under which lsqcurvefit() might decide that it is no longer profitable to try to get a better answer. When you get either of them, the output might be the closest possible representation to the exact solution, or it might only be the closest you can expect to get to within the tolerance boundaries that you set up; or it might possibly be the case that mathematically there is no exact solution in reals.
The situation where lsqcurvefit detects that it is stuck, not able to get a better answer, but that the location it is at currently doesn't seem to be very good: that generates a negative error code. Sometimes it means that you need to try again with different positions; sometimes though it is just a badly non-linear model and the place you got to is really the best possible representation within floating point limitations. 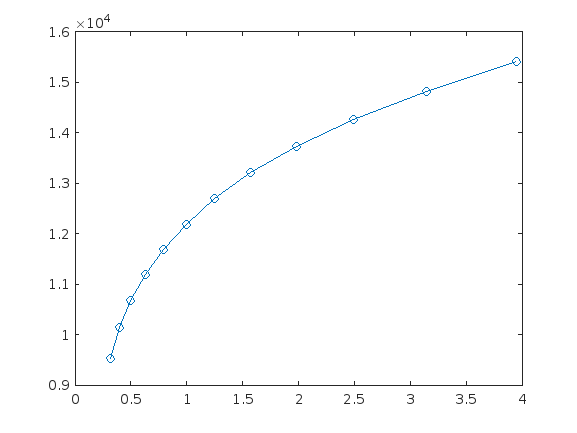 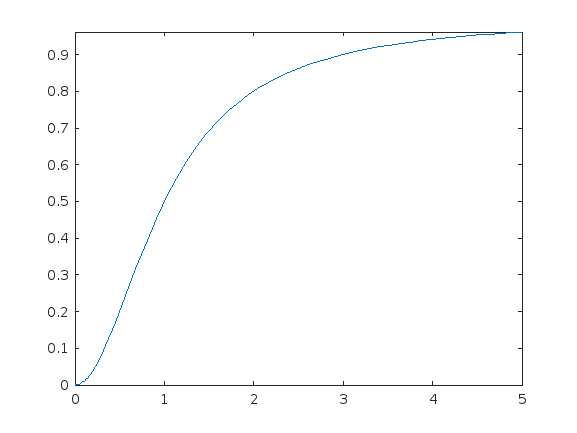 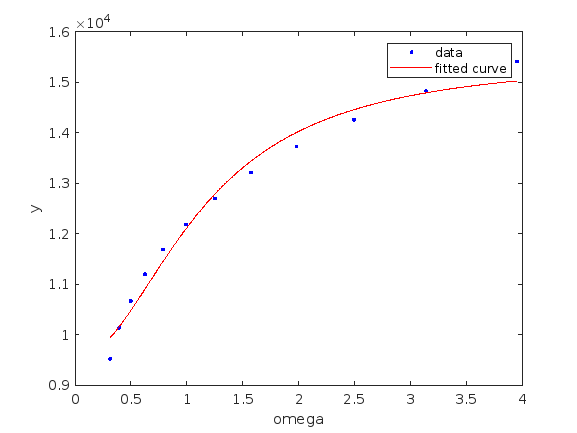 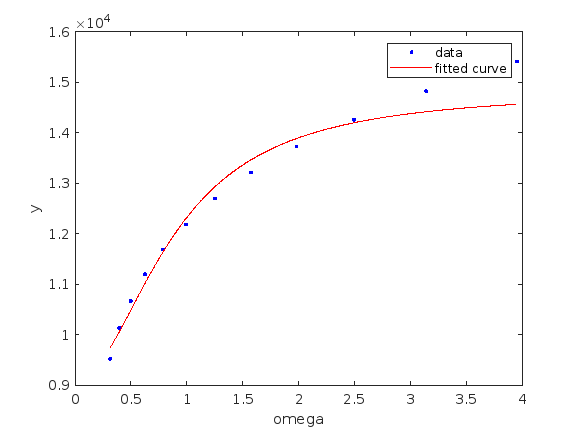 numel(omega)
ans = 12
You have 12 data points only. And a model where a third term will be useless. Trying to fit a 7 parameter model of this form is a waste of time. Certainly so on this data.
Sorry. It is.